I've often spoken about this series being inspired in part by growing up with amazing, perfect greatest hits collections by acts like Queen and Tom Petty and wanting to make companion compilations of the non-hits. And I would put Squeeze in that category, too, because as a teenager I fell in love with their best known singles and then heard, as people have for decades, their incredibly jam-packed 1982 collection

Singles - 45's And Under. And I think a band having a compilation like that can be a mixed blessing, because it kind of pushes every other album down a rung in cultural presence even as it may help elevate the stature of the band and/or some of their songs. But this week Squeeze are releasing their 14th (or 15th -- more about that later) album of new songs, The Knowledge, so here's a look back at the albums from their first decade.
Squeeze deep album cuts (Spotify playlist):
1. Vicky Verky
2. In Quintessence
3. Slightly Drunk
4. Wrong Side Of The Moon
5. I Can't Hold On
6. Revue
7. First Thing Wrong
8. Someone Else's Ball
9. Someone Else's Heart
10. Cigarette Of Single Man
11. Separate Beds
12. You Can't Hurt The Girl
13. Break My Heart
14. Get Smart
15. There At The Top
16. Touching Me Touching You
17. Woman's World
18. Onto The Dancefloor
19. Misadventure
20. The Knack
21. Man For All Seasons
22. The Prisoner
23. Mumbo Jumbo
24. Points Of View
Tracks 7 and 14 from Squeeze (1978)
Tracks 3, 6, 16 and 20 from Cool For Cats (1979)
Tracks 1, 4, 11, 15 and 19 from Argybargy (1980)
Tracks 2, 8, 9, 17 and 23 from East Side Story (1981)
Tracks 5, 18 and 24 from Sweets From A Stranger (1982)
Tracks 12 and 21 from Difford & Tilbrook (1984)
Tracks 13 from Cosi Fan Tutti Frutti (1985)
Tracks 10 and 22 from Babylon And On (1987)
Hearing 'Vicky Verky' on a mixtape somebody made me was what really got me to check out Argybargy and East Side Story and enjoying Squeeze beyond the singles, and it's still just one of my favorite Squeeze songs, so compact and full of little twists and turns, so I had to lead off this playlist with it. I'm a huge Elvis Costello fan, and I feel like Squeeze are really one of his closest contemporaries in terms of being able to write songs that are as dense and verbose as they are fast and hooky.
Chris Difford and Glenn Tilbrook are one of the great modern songwriting duos in my book. And I find it interesting that instead of a Lennon/McCartney dynamic of two singer/songwriters who have their own songs and help each other, there's more of a division of labor of Difford writing the lyrics and Tilbrook writing the melodies, which is kind of unusual in the rock world (Fall Out Boy is one of the only major bands I can think of with a similar way of working). Both sing, but Tilbrook tends to sing more and has a much more appealing voice, and he's the voice of most of the band's hits, with a couple of exceptions: Difford sang the band's first big U.K. top 10 record, 'Cool For Cats,' and of course keyboardist Paul Carrack famously sang one of Squeeze's signature songs, 'Tempted.'
Usually when a band has one main frontman and another member that just sings occasionally, I tend to really like or kinda root for 'the other guy.' But I tend to really not like the Difford songs as much as the Tilbrook songs, so there are only three there ('The Knack,' 'Someone Else's Heart,' and my personal favorite, 'Wrong Side Of The Moon'). But there are a fair number of good songs where Difford sings back up or he and Tilbrook kinda sing in unison, which I think works better than Difford's sort of monotone voice.
As I said, Squeeze have either 14 or 15 albums, and that's because even when the band nominally broke up for about 2 years in the '80s, the band's two songwriters continued collaborating and released one album as a duo, the self-titled 1984 album by Difford & Tilbrook. Then they reformed Squeeze, and have remained the band's only two constant members throughout its history, so it kind of makes sense to count the Difford & Tilbrook album as part of the Squeeze discography, even if its sound is a bit more synthy than the band's output.
If there's any album that sticks out like a sore thumb, it's actually Squeeze's first album. They went into the studio with Velvet Underground legend John Cale as their producer, and Cale basically threw out the songs the band had written and gave them instructions on what kind of new material to write. The results are interesting at times and resulted in a few decent songs, although 'First Thing Wrong' seems to me like kind of a fitting statement from a band whose debut album went awry. The fact that Squeeze went on to make much better albums by doing things their way without Cale, though, I think speaks to that record being kind of a bust.
Previous playlists in the Deep Album Cuts series:
Vol. 1: Brandy
Vol. 2: Whitney Houston
Vol. 3: Madonna
Vol. 4: My Chemical Romance
Vol. 5: Brad Paisley
Vol. 6: George Jones
Vol. 7: The Doors
Vol. 8: Jay-Z
Vol. 9: Robin Thicke
Vol. 10: R. Kelly
Vol. 11: Fall Out Boy
Vol. 12: TLC
Vol. 13: Pink
Vol. 14: Queen
Vol. 15: Steely Dan
Vol. 16: Trick Daddy
Vol. 17: Paramore
Vol. 18: Elton John
Vol. 19: Missy Elliott 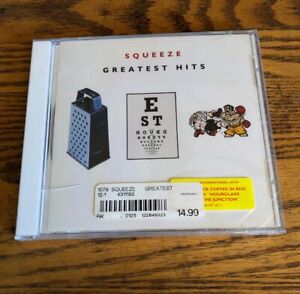