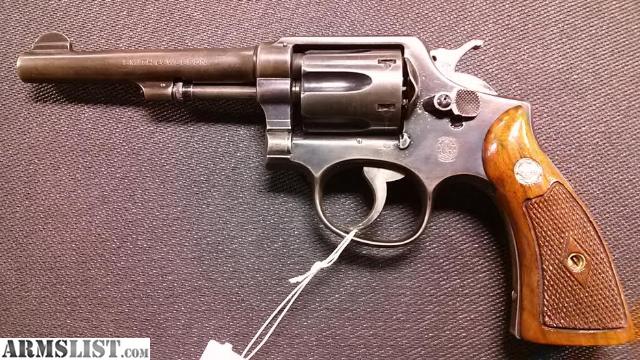 Similar in appearance to .32 1st Model. Having a straight cut side-plate but chambered for .38 S&W cartridge. Grips are checkered. Serial Range 1-about 4000. Manufactured circa 1880.

A unique top-break, with both a barrel latch similar to other top-breaks and thumb-piece similar to hand ejectors. Also the only top-break where triggerguard is integral to the frame, rather than a separate piece. Produced from 1909 to 1920 in their own serial number range 1-59400.

Approximately 100 sold to U.S. government in 1890. They have 3rd Model features, but in 2nd Model serial number range 41333-41470. Fitted with 6' barrels and marked 'US'. CAUTION: Be wary of fakes. NOTE: Rarity makes valuation speculative.

Courtesy Mike Stuckslager
Produced in .38 S&W only. The only difference in 4th Model and 3rd Model is adoption of standard T-bar type of barrel latch as found on most of the top-break revolvers. '.38 S&W Cartridge' was also added to the left side of barrel. Approximately 104,000 manufactured between 1898 and 1907. Serial number range 116003 to 220000.

Courtesy Mike Stuckslager
Last of the 'Lemon Squeezers'. Only appreciable difference between this model and 4th Model is the front sight blade on 5th Model is an integral part of the barrel, not a separate blade pinned onto the barrel. Approximately 41,500 manufactured between 1907 and 1940. Serial number range 220001 to 261493. NOTE: Add 50 percent for 2' barrel version.

This model represented a number of firsts for Smith & Wesson Company. It was first of the top-break automatic ejection revolvers. Also first Smith & Wesson in a large caliber (chambered for .44 S&W American cartridge as well as .44 Henry rimfire on rare occasions). Also known as 1st Model American. This large revolver offered with an 8' round barrel with a raised rib as standard. Barrel lengths of 6' and 7' were also available. It has a 6-shot fluted cylinder and square butt with walnut grips. Blued or nickel-plated. Interesting to note, this model appeared three years before Colt's Single-Action Army and perhaps, more than any other model, was associated with the historic American West. Only 8,000 manufactured between 1870 and 1872. NOTE: Add 25 percent for 'oil hole' variation found on approximately first 1,500 guns; 50 percent for unusual barrel lengths other than standard 8'. Original 'Nashville Police' marked guns worth a substantial premium. About 200 made in .44 Henry rimfire will bring 25% to 50% premium.

One thousand produced with 'U.S.' stamped on top of barrel. 'OWA' on left grip. They are scattered in the serial number range 125-2199. 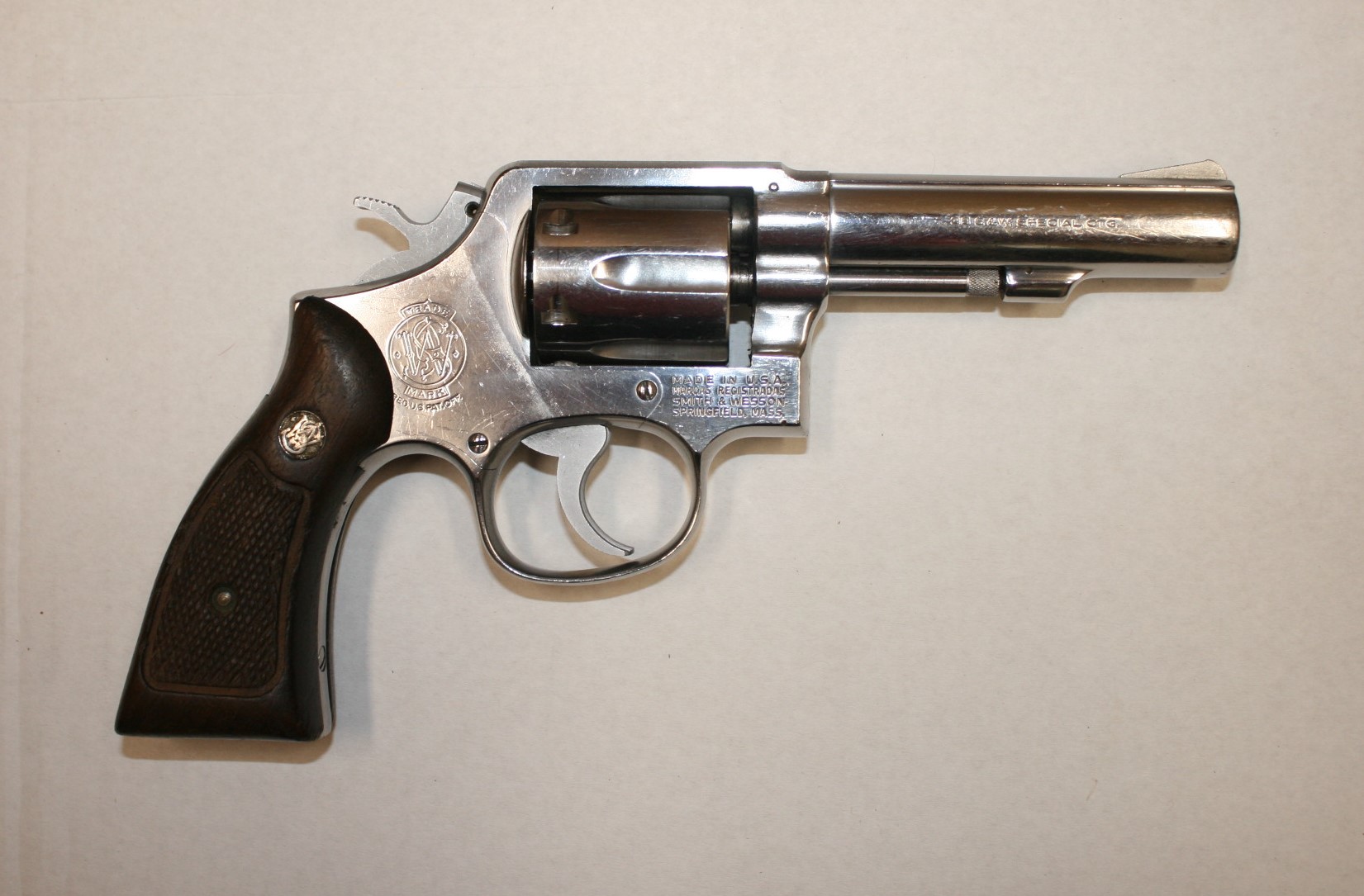 Courtesy Buffalo Bill Historical Center, Cody, Wyoming
An improved version of 1st Model. Most notable difference is larger diameter trigger pivot pin and frame protrusions above trigger to accommodate it. Front sight blade on this model is made of steel instead of nickel silver. Several internal improvements were also incorporated into this model. This model commonly known as American 2nd Model. The 8' barrel length was standard. Approximately 20,735 manufactured between 1872 and 1874. NOTE: There have been 5.5', 6', 6.5' and 7' barrels noted; but they are extremely scarce and would bring a 40 percent premium over standard 8' model. Use caution when purchasing these short barrel revolvers. Approximately 3,014 chambered for .44 Henry rimfire with large triangular flat-tip firing pin, may bring 10% to 25% premium.

Configuration is about identical to American 2nd Model. S&W made several internal changes to this model to satisfy the Russian government. Markings on this revolver are distinct. Caliber for which it is chambered, .44 S&W Russian, is different from the 2nd Model Russian. Approximately 20,000 Russian-Contract revolvers. Serial number range 1-20000. They are marked in Russian Cyrillic letters. Russian double-headed eagle stamped on rear portion of barrel, with inspector's marks underneath it. All contract guns have 8' barrels and lanyard swivels on the butt. These are rarely encountered, as most were shipped to Russia. Commercial run of this model numbered approximately 4,655. Barrels are stamped in English and include the words 'Russian Model'. Some are found with 6' and 7' barrels, as well as standard 8'. There were also 500 revolvers that were rejected from the Russian contract series and sold on the commercial market. Some of these are marked in English; some, Cyrillic. Some have the Cyrillic markings ground off and English restamped. Manufactured from 1871 to 1874. Guns with Cyrillic barrel markings may bring up to 25% premium.

Courtesy Jim Supica, Old Town Station
This revolver was known as 'Old Model Russian'. This is a complicated model to understand as there are many variations within the model designation. Serial numbering is quite complex as well and values vary due to relatively minor model differences. Before purchasing this model, it would be advisable to read reference materials solely devoted to this firearm. Chambered for .44 S&W Russian, with some scarce variations in .44 Henry rimfire cartridge. It has a 7' barrel and a round butt featuring a projection on the frame that fits into the thumb web. Grips are walnut and finish blue or nickel-plated. Triggerguard has a reverse curved spur on the bottom. Approximately 85,200 manufactured between 1873 and 1878. Variations include:Russian Contract Cyrillic marked – 10% premium, Japanese Navy, anchor with 2 wavy lines marked – 10% premium, .44 Henry Rimfire variations. Flat tipped triangular firing pin, Commercial - 500 made – 25% premium, 1st Turkish Contract, s/n range 1-1000 – 25-50% premium, 2nd Turkish Contract in standard s/n range – 25% premium 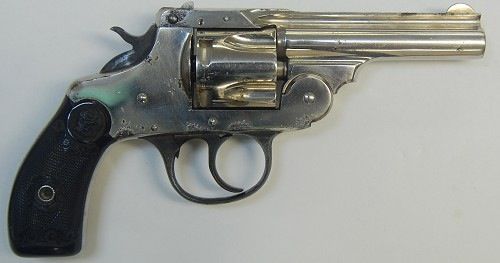 70,000 made; rare, as most were shipped to Russia. Cyrillic markings; lanyard swivel on butt.

Made from altered centerfire frames from regular commercial serial number range. 1,000 made. Use caution with this model.

Model 3 Russian 3rd ModelThis revolver is also known as 'New Model Russian'. Factory referred to this model as Model of 1874 or Cavalry Model. Chambered for .44 S&W Russian and .44 Henry rimfire cartridge. Barrel is 6.5' and round butt is the same humped-back affair as 2nd Model. Grips are walnut and finish blue or nickel plated. Most notable differences in appearance between this model and 2nd Model are shorter extractor housing under the barrel and integral front sight blade instead of pinned-on one found on previous models. In addition to S&W production for the commercial market and Russian military, the German firm of Ludwig and Lowe and the Russian Tula arsenal made copies of this gun for the Russian military. These and other variations impact values. Refer to Standard Catalog of Smith & Wesson available at GunDigestStore.com for details. Approximately 60,638 manufactured between 1874 and 1878. Variations include: Japanese Navy, anchor with 2 wavy lines marked – 10% premium; .44 Henry Rimfire. Turkish contract or commercial – 25% premium; Russian Contract Cyrillic marked - Made by S&W – 10% premium; Made by Ludwig & Loewe – 10% premium; Made by Tula Russian arsenal – 20% premium

5,000 made from altered centerfire frames. Made to fire .44 Henry rimfire. 'W' inspector's mark on butt. Fakes have been noted; be aware.

1,000 made. Has Japanese naval insignia, an anchor over two wavy lines, stamped on butt.

German firm of Ludwig Loewe produced a copy of this model that is nearly identical to the S&W. This German revolver was made under Russian contract, as well as for commercial sales. Contract model has different Cyrillic markings than S&W and letters 'HK' as inspector's marks. Commercial model has markings in English. Russian arsenal at Tula also produced a copy of this revolver with a different Cyrillic dated stamping on barrel.

No 'US' markings, 35 made, Very Rare. NOTE: Use caution. UNABLE TO PRICE. At least double the military model values. Expert appraisal needed.

Similar to the 1st Model Schofield with most noticeable differences being circles on each side of the frame-mounted latch, and serial number range. The vast majority were military issue, and are 'US' marked on butt. See comments on modified surplus guns and Wells Fargo Schofields at the listing for First Model Schofields above. In total, 646 Civilian Models were made, but despite their relative rarity they bring about the same value as the more common U.S.-issue Schofields. Serial range 3036-8969. Circa 1876-1877.

Distributor modifications — After military use, many Schofields were sold as surplus and modified by distributers, who sometimes refinished the guns and shortened the barrel to 5”. These modified guns will bring less than guns in original configuration, perhaps 50% of what an original unaltered Schofield will bring.Wells Fargo — The famous Wells Fargo Express Company purchased a number of these shortened 5” barrel surplus Schofields and marked them on the ejector housing “W F & CO (or CO’S) EXP” along with the gun’s serial number. These “Wells Fargo Schofields” will bring close to the value of an original unaltered US Schofield. Beware of fake markings.San Francisco Police — Some Schofields are found with large 2- or 3-digit numbers stamped near the top of the backstrap. These have traditionally been “San Francisco Police” models, sent to California at the time of the Sandlot Riots. They will bring a slight premium.Civilian Models — See comments at 1st and 2nd Model Schofield listings above.