The killer appeared in London’s Whitechapel district in 1888 and murdered five women—all prostitutes—and mutilated their corpses. Police surmised the killer was a surgeon, butcher, or someone skilled with a scalpel. The killer mocked the community and the police by sending letters outlining the acts.

While investigating Jack the ripper, local police received hundreds of letters. Many of which from people claiming to be the murderer. Most letter were obviously fake. But some are actually thought to be from the ripper. The most famous letter was sent along with a human kidney. Known as the “From Hell” letter, it reads like this:

“From Hell.
Mr Lusk,
Sor, I send you half the kidney I took from one woman presarved it for you tother pirce I fried and ate it was nice. I may send you the bloody knife that took it out if you only wait a while longer. Signed. Catch me when you can mister Lusk.”

It was received by George Lusk, who was the head of a local neighborhood watch.

Dennis Rader is a serial killer known by his signature – BTK. That’s how he would sign off the many letters he sent to the police. It was these letters that eventually led to his capture and conviction of 10 murders. One of his letters read like this:

When this monster enter my brain, I will never know. But it here to stay. Society can be thankful that there are ways for people like me to relieve by daydreams of some victim being torture. It a big complicated game my friend of the monster play putting victims number down. Follow them, checking up on them, waiting in the dark, waiting, waiting… maybe you can stop him. I can’t. He has already chosen his next victim.”

Known as the Unamomber, Ted Kaczynski killed several people with home made bombs. He specifically targeted anyone working with modern technology. His bombing campaign lasted 17 years until his eventual arrest in 1995. On that year, he sent copies of his manifesto to newspapers and demanded they publish it. If the manifesto wasn’t published he would send bombs to more people. The manifesto was 35 thousand words long but here is a small segment:

We tend to think of serial killers as maniacs. But here is a well educated man able to write well; that’s why it’s creepy. They was the Unabomber was eventually caught is that his own siblings turned him into the FBI after they realized his manifesto sounded exactly like what he said.

The long island serial killer has claimed 17 victims, but still police have no idea who he is. After murdering Melissa Barthelemy, he contacted her younger sister with her cell phone. He asked if he was speaking to Melissa’s sister, and then he called her a whore. In the coming weeks he would call several more times to engage in similar conversations. But he would never stay on the phone long enough for police to determine his location. As an unidentified serial killer he could be anywhere.

In murdering 6 people, David Berkowitz came to be known as the “son of sam”. For a while, he terrorized New York city with his killing spree and his commitment to setting fire to as many buildings as possible. After being arrested he claimed to have just been obeying the orders of a demon. He said the demon had possessed his next door neighbors dog. And that’s how they communicated. He also claimed to have been part of a Satanic cult who helped him find his victims. At crime scenes he would leave messages for police to find. Things like:

He’s known to have enjoyed the media attention his messages received. 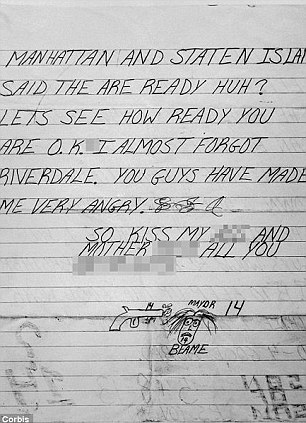 Just last month a Bangladeshi man and his wife were found shot dead in California. Their two sons were shortly arrested for committing the murders. No one’s really sure why they did it. But the left two messages. They read like this:

“Sorry my first kill was so clumsy”.

Darius Kotwica has been called Europe’s first serial killer. He commit murders across Europe, rather than in just one or two countries. He was recently caught after killing six people in six different countries. And strangely, he would carve messages into his victims skin for police to discover. The messages told that he enjoys torturing people before they die. Other messages told that he was forced to commit murder by voices in his head. Much like David Berkowitz, he believed the voices were from an evil demon commanding him. Some of the messages were just random words that don’t make any sense when put together.

The original night stalker is the name of an unidentified serial killer and rapist in California. He was notorious for taunting his victims by leaving messages on their answering machines. The video above is one of them. He also wrote a series of letters to local newspapers in 1977. In the letters were poems like this one:

“To make a movie of my like. That will pay for my planned exile. Just now I’d like to add the wife. Of a mafia lord to my file. Your East Area rapist. And deserving pest. See you in the press or on tv”.

The Zodiac killer took at least 5 lives, but he claimed to have taken 37. It was the late 1960s and he sent 4 encrypted messages to local newspapers. Only one of the messages has been solved. We can’t be sure what the others say. The killer said that solving the messages would reveal his identity. But he’s never been identified. This is how the deciphered letter starts and ends:

“I like killing people because it is so much fun. It is more fun than killing wild game in the forests because man is the most dangerous animal of all…
You will try to slow down or stop my collecting of slaves for my afterlife”.

Eddie Seda was a copycat killer who modeled himself on the Zodiac. In the early 1990s he sent messages to local newspapers. In them, he declared himself the Zodiac and said he would killer 12 people – one for each zodiac symbol. In reality he only managed to kill three people. He was arrested after attacking his own sister and police recognized his hand writing from the letters he wrote. Like I said in the intro, sending anonymous messages is a big mistake for serial killers. He was found guilty and is currently serving his 232 year sentence.

OUR VIDEO ON THIS: