Flextron is a virtual-analog guitar amp made for KVR DC14. It's based on a concept of the hybrid guitar distortion pedal I've built for myself a while ago. The prototype pedal in its turn was based on two commercial tube emulation technologies – Flexwave by Crate and Cooltron by VOX.

This combination was discovered by accident when I was repairing my bandmate's VOX Bulldog distortion pedal. I didn't like the Bulldog that much, however I got interested in its low-voltage tube design so I assembled a copy on a test bench. On its own it has provided very little overdrive, just as expected, but when combined with the Crate Flexwave preamp (my favorite solid-state distortion) it has completed its already great tone, giving it more fullness and presence. I've used this arrangement for rehearsals and some gigs and got complemented for the tone.

Flextron goes a step further and accurately models a range of Crate solid-state amps powered by the Flexwave circuit. Every stage of the preamp signal path is carefully analyzed and modeled with the same attention to details as my previous SoftDrive GV and SoftAmp FM25 plugins.

The Flexwave amp design has evolved over the years. I counted 6 different variations. After careful analysis, I've narrowed down the scope to 3 models. The one I've played with was made in the late 90's and I think it's ahead of the pack. However in 2000's they have changed the gain channel structure significantly and after some consideration I've decided to model all three.

The Cooltron circuit in its turn stayed the same across their pedal range. I've tried a couple of different approaches to modeling it before settling on the final one. Since I've had a real physical implementation at my disposal I was able to successfully verify the accuracy of the digital model.

Interestingly, both Flexwave and Cooltron follow exactly the same idea – they essentially are an asymmetric clipping stage biased by the low-passed feedback signal. Having made my own SoftAmp 3OD model I can say that this is exactly how a real guitar amp triode stage works. The main difference is that Cooltron uses a 12AU7 tube running on 6V anode voltage for the authentic tube waveshaping, while Flexwave relies on an asymmetrically configured 'rubber diode' pair to achieve the same effect.

In addition to the fully featured 3-channel preamp and a tube saturation stage, Flextron offers a dual-mode stereo reverb (algorithmic and convolution-based), a speaker simulator with two cabinet models and an ambience control (intended mainly for practicing in headphones), a switchable order oversampling and a set of visualization instruments, such as an EQ curve plot and stage bias meters.

Just as with my previous plugins, every single control is remapped to produce linear response on a dB scale.

Additional details can be found in the bundled manual.

“Crate” and 'Flexwave' are registered trademarks of LOUD Technologies Inc. 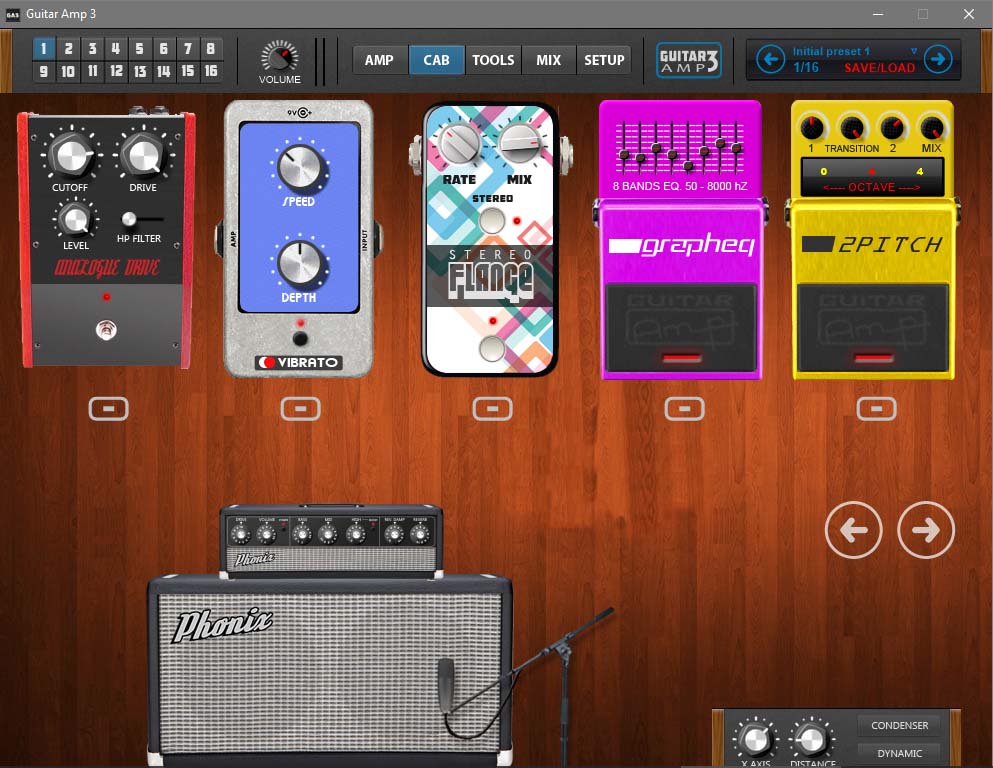 An instrumental track composed and recorded by a Czech musician and producer Martin Linda using AXP Flextron (also check out his site):
http://soft-amp.com/MartinLinda_Flextron

Long and detailed playthrough by Amner Hunter (make sure to listen to the track at the end of the video):
http://www.youtube.com/watch?v=lJn2ngD3Am8

1.0.03 Bugfix:
- Fixed a bug that caused no output upon plugin loading with Tube stage enabled

1.0.02 Bugfix:
- Fixed a bug that caused a crash in 64 bit mode on the latest Intel 'Devil's Canyon' CPUs
- Fixed a wrong redraw behavior of the Tube Saturation plot