Just found this looks like it could be fun. And the price is definitely better than the similar Xone mixers... 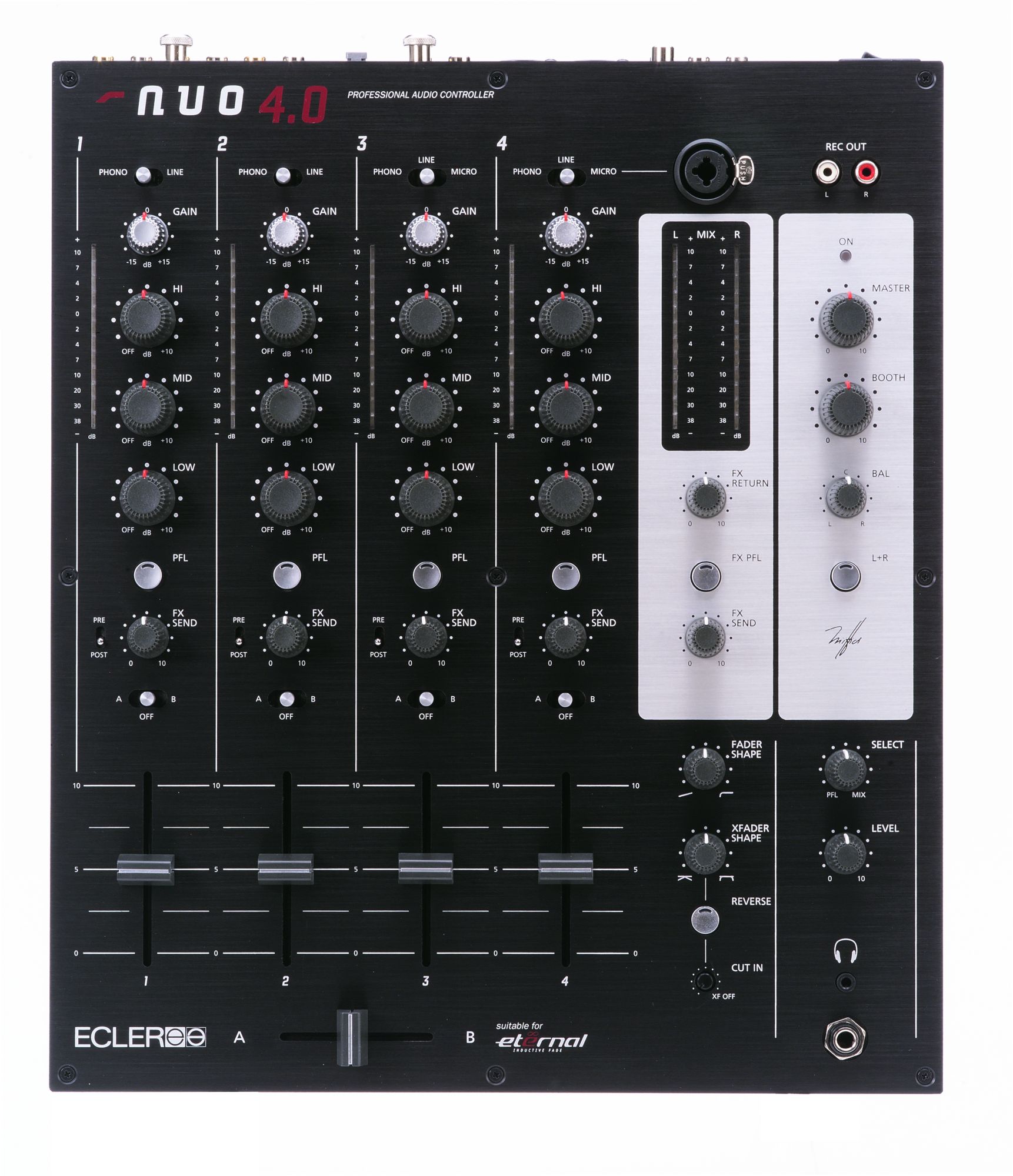 ECLER NUO4
Nov 1, 2005 12:00 PM
BRING IT >The NUO4 includes all of the features and connection points one would expect from a higher-end DJ mixer. Each of the four channels includes both line and phono inputs; also present are a phantom-powered mic input, additional RCA inputs and more.
Spain-based Ecler has a long-established reputation as a manufacturer of high-quality mixing consoles (most notable, its MAC line). Recently, the company made its mark internationally with the HAK line of mixers aimed at turntablist DJs. These mixers were quickly accepted as worthy competitors to Vestax, Rane, Stanton and Numark. With the new NUO line, Ecler focuses on the general DJ market, offering high-quality mixers that include some innovative features. I had a chance to play with the NUO4, one of the first DJ-oriented mixers to include a MIDI controller. Not being a user of MIDI, I thought that its inclusion in a DJ mixer was strange. When I discovered that the purpose was to allow integration with software packages like Ableton Live and Native Instruments Traktor, I was curious. Then, when I used it for the first time, I was sold.
FIRST IMPRESSIONS

Out of the box, the NUO4 looks like a well-made 4-channel mixer. Its high-quality matte black finish contrasts with a central silver plastic strip surrounding a fifth column of MIDI controls. The rotary knobs on each channel are notable for their oversized, finger-friendly design — Ecler clearly thought about ergonomics. And despite a large number of knobs, buttons and switches, the layout is intuitive. The mixer measures 14.5 by 12.5 by 3.1 inches and sits nicely at standard turntable height. The back panel offers a well-laid-out collection of input and output connectors. Annoyingly, however, the phono ground connectors are quite far away from two of the phono inputs, posing a bit of a stretch for turntables with the ground connector integrated into the phono cable. 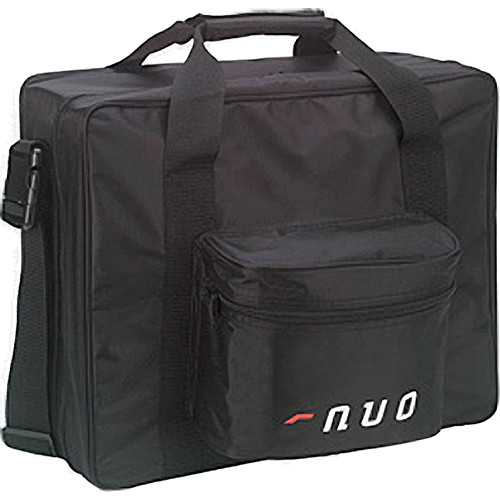 GET READY FOR MIDI
The most exciting and innovative feature of the NUO4 is its MIDI Control section. Use of the MIDI features requires a computer capable of running Windows XP/2000 or Mac OS X. The mixer can be connected to a PC via a standard 5-pin MIDI cable or USB. The NUO4 features a central column of dedicated MIDI controls. This includes four rotary control knobs that also act as switches when clicked, as well as four buttons — 12 controls in all. Each of these controls can be programmed to send as many as three different MIDI messages (by using the three-way Layout switch), allowing for multiple uses of each control. An additional A/B Tap button doubles this with the intention that position A controls the left-hand virtual deck in a program like Traktor and position B controls the right-hand virtual deck.
Furthermore, when set to MIDI Control, Inputs 2 and 3 also send MIDI signals through the Gain and EQ controls as well as the main fader and crossfader. In total, 89 separate MIDI messages can be sent from the mixer, allowing for some interesting fun when used with MIDI-capable software.
Connecting the mixer to your computer requires the installation of a driver (provided on CD or downloadable from the Ecler Website). Once the driver is installed, your computer will recognize the NUO4 as an Ecler USB MIDI device. An additional install of the intuitive Control4Lab software allows you to change, load and save the MIDI channel and note settings for each MIDI control through an onscreen virtual NUO4. This allows you to create custom settings per software package.
The silver plastic cover that surrounds the MIDI controls is a removable magnetic plate with small see-through plastic windows that enable you to print your own labels for each of the controls (a template is provided on the CD). This is a nifty idea, but in reality, the small window size coupled with the silver background of the removable plate made reading the labels in low light fairly difficult.
I tested the MIDI features of the NUO4 with the Traktor 2.6 demo, an application I had yet to use. After familiarizing myself with the basic operation of Traktor, I configured it to accept MIDI input from the NUO4. (You have to activate the Ecler NUO4 In entry in the MIDI tab of Traktor's setup dialog.) Using the NUO4's default Traktor settings, I found the controls to be fairly intuitive. For example, the rotary knobs can be used to select and load songs, and the buttons can be used to play, cue, sync and loop them once loaded. Flip the three-way Layout switch to Layout 2, and you can control some of Traktor's built-in effects. Additionally, when Inputs 2 and 3 are set to MIDI, their EQ, gain and fader settings directly adjust the equivalent controls in Traktor. After a little time, I was able to load instrumental tracks in Traktor, sync and loop them, and then scratch vinyl samples over the top using Inputs 1 and 4 — all from the comfort of my mixer, with no keyboard or mouse required! Furthermore, the MIDI controls synched perfectly with the software, with no noticeable delay.
FINAL MIX

I am certain I only scratched the surface of what this mixer can do, especially given that each MIDI signal can be configured to control any of Traktor's features through the Control4Lab software and the Traktor MIDI Settings dialog. Furthermore, the options that this mixer offers when used with real-time music-production tools like Ableton Live boggle the mind. Ecler has hit on a winner with its integrated MIDI Control section, affording new levels of software control to advanced performance DJs — all direct from the mixer. Pairing this mixer with Stanton FinalScratch and the Traktor software could result in an excellent scratchable, computer-based music-performance and production setup — and I'm sure the industry is going to see more products like this in the near future.
The NUO4 is clearly a well-designed, high-quality piece of equipment, and I have every confidence that it can stand up to the rigors of road life. With innovative new MIDI features that allow superb software integration, the NUO4 sets a new standard for the features that users can expect from a high-end DJ mixer. The bar has been raised.
ECLER (DIST. BY SOUNDWERKS AUDIO)
NUO4 > $749
Pros: MIDI controller and software integration. Crossfader cut-in adjustment. Highly configurable setup. Integrated power supply and standard power cable.
Cons: Fader-curve adjustment setting for main faders. Oddly placed phono ground. Readability of MIDI Control labels.
Contact: www.eclerdjdivision.com or www.soundwerksaudio.com