Overview:
The MT-KEY86-L6 is a software upgrade key, that upgrades the PC in question to a level 6 license. This opens up all options in the software and allows you to make a limited number of connections that you need. Unlimited VPN, PPPoE, PPTP, and hotspot connections.
Features:
RouterOS Level 6 license gives you: 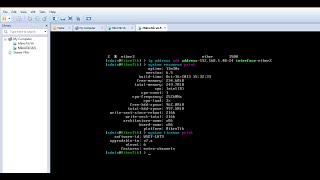 MikroTik is a Latvian company which was founded in 1996 to develop routers and wireless ISP systems. MikroTik now provides hardware and software for Internet connectivity in most of the countries around the world. MT-KEY86-L6 MikroTik RouterOS Level 6 License Key - PC / X86 Systems Only is available from Laptop Direct and it is sold as new from our Network: Licenses range of products. For reference purposes, the price of R3675 is valid 2020-11-27, and while stocks last, may be valid until 2020-11-30, but this is a guide only.

© Respective owners and brand holders. © 2020 Laptop Direct CC. The contents has been generated by Laptop Direct CC (https://www.laptopdirect.co.za). All products are sourced locally in South Africa and the warranty is that of the local supplier only. E&OE.