Surah Yaseen (the Heart of Quran) is an Islamic Surah takes its name from the two letters of the alphabet with which it begins, equivalent to reciting Holy Quran. Some of the Surahs have great importance and reverence leading to incredible benefits for the readers. Surah Yaseen Urdu has designed with 100% accuracy and delivered after full proof reading without any mistake. Surah Yasin in Urdu translation is an authentic Urdu translation which is acceptable for all Muslims scholars. Recitation with a very beautiful voice is included and you can listen to Surah Yasin mp3 with Urdu translation and Arabic audio. سورت یسین (Surah yaseen) is the heart. Learn the Arabic Alphabets. 'In the name of Allah, the Beneficent, the Merciful' PrivateQuranTutor.webs.com service offers exclusive internet telephony learning solutions for students all over the world. Our service lets you access well qualified Hafiz of Quran via our unique learning format which allows you to learn the Holy Quran with tajweed.

LEARNING TO READ THE YASEEN SURAH WITH TAJWEED

This is just a study guide for those who are at the learning stage. You must learn how to pronounce the Arabic letters from a qualified person!

HOLD YOUR MOUSE ON THE LETTER TO SEE THE PRONOUNCIATION (Don't click.)

Please be careful while pronouncing the FATHA, e.g., the 'a' sound. For example, the 'a' in 'wa' should be pronounced like 'e' in 'went'. Likewise, all the 'a' in the sura should produce an 'a' sound like 'e' in 'went'.
Some Fatha produces an 'a' sound like 'a' in English word 'art'. For example, 'a' in Arabic word 'qawl' is like 'a' in art. All 'a' in the sura should produce a variation of the 'a' sound in 'art'. Sometimes 'a' is little softer like 'la' in 'la miserables or Labrador.' Sometimes it is a little longer, e.g. it is written with two 'aa' so it produces a little longer 'a' like longer 'a' in English word 'far.' The 'a' sound in Arabic words 'maa' or 'laa' are the 'a' sound in 'far'. Ayn with fatha is represented by 'A'. Ayn with sukuun is represented by 'Å'.
KASRAs should produce a 'i' sound like 'i' in 'sin'. Ayn with kasra is represented by 'I'.
DAMMA should produce a 'u' sound like 'u' in 'do' or sometimes little softer like 'u' sound in 'you'. Mostly the 'u' sound is like the sound produced by the 'oo' in English. The sound produced depends on the letter, e.g., if the letter is a soft letter like b,h,y,s the 'u' sound will also be softer. For example, 'bu' will be like in 'boon' or 'su' will be like in 'soon'. Ayn with damma is represented by 'U'.

There are a few rules for reading the Qur'an beautifully. The Arabic text below incorporated some of these rules. These rules must be learned and applied when the reader comes across to the rule because the arabic text below could not incorporate some of the rules, i.e., it involves converting a letter to another letter. The rules will be explained first and then that rule will be represented by an acronym, e.g., by some capital letters, and then that acronym will be used when that tajweed rule exists in an ayat. Most of the rules involve the first letter of a word coming after a word which ends with noon-u saakin (the letter of 'n' with a sukuun or jazm over it, like 'min') or a word ending with tanwin, e.g., the word which ends with two fathas (like khayran) or two dammahs (like khayrun) or two kasrahs (like dhikrin). The latin text below already incorporated all the rules. The reader should just read the text the way it is written because all the necessary conversions are already incorporated to the text. But user still has to learn and apply the rules to produce the sound from the nose or whatever has to be done when it is required by the respective rule. 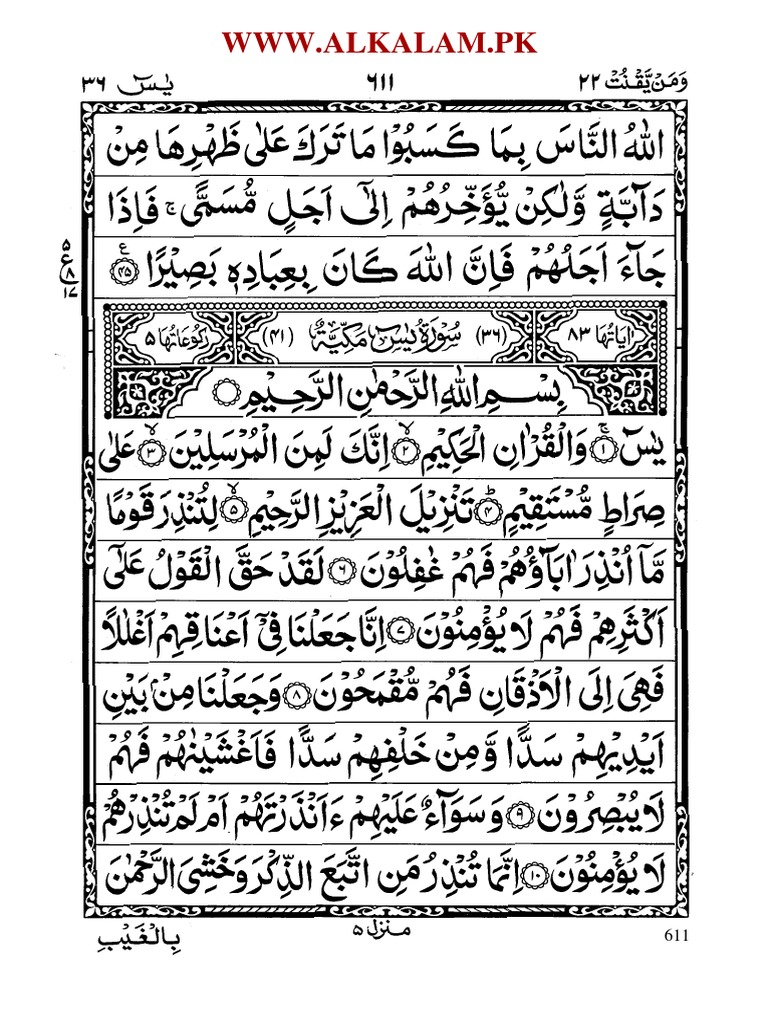 IDGAAM: combining two letters to make one letter and reading that letter with shadda, by closing the lips.

GUNNA: the sound produced from the nose.

iZhaar (IZ): when one of the iZhaar letters (a, kh, H, 'A, g, or h) comes after the noon-u saakin or tanwin, iZhaar occurs. IZhaar means separating two words distinctly by opening the lips. For example, for 'man amana' we distinctively finish the 'man' and then start the 'amana.'

IKHFAA (IKHF): Ikhfaa letters are the following fifteen letters: t, th, j, d, dh, z, s, sh, S, D, T, Z, f, q, and k. When one of the ikhfaa letters comes after the noon-u saakin or tanwin, ikhfaa occurs. The tong stays in the middle of the mouth touching neither to top nor to the bottom and a sound will be produced from the nose, i.e., GUNNA. Also, the lips will neither be closed like in idgaam nor opened like in iZhaar and without doing shadda the letters will be produced.

IDGAAM MA'AL GUNNA - idgaam with gunna (IDMG): when one of the idgaam letters (m,n,w or y) comes after the noon-u saakin or tanwin, IDMG occurs. IDMG is performed in the following manner: the noon-u saakin or tanwin will be converted to the first letter of the following word and will be read with shadda while making sound from the nose simultaneously. Lets assume that the first word is 'SiraTin' and the following word is 'mustaqiym'. Since the second word starts with 'mim', the last letter of 'SiraTin', i.e., the 'n' will be converted to 'mim'. One of the mims will be dropped and the remaining one 'mim' will be read with shadda while making the sound from the nose. It will be read 'SiraTimmustaqiym', see ayat four below.
OTHER EXAMPLES:
Example for letter 'm': 'basharun mithlunaa' becomes 'basharummithlunaa', see ayat 15 below.
Example for letter 'n': 'man nu'Ammirhu' becomes 'mannu'Ammirhu', see ayat 68 below.
Example for letter 'w': 'SayHatan waaHidatan' becomes 'SayHatawwaaHidatan', see ayat 49 below.
Example for letter 'y': 'falakin yasbaHuuna' becomes 'falakiyyasbaHuuna', see ayat 40 below.

IDGAAM BILA GUNNA - idgaam without gunna (IDBG): when one of the IDBG letters (r or l) comes after the noon-u saakin or tanwin, IDBG occurs. The noon-u saakin or tanwin will be converted to the first letter of the following word and will be read with shadda. Lets assume that the first word is 'min' and the following word starts with 'lam'. In this case, the last letter of 'min', i.e., the 'n' will be converted to 'lam' and thus now there are two 'lam'. We drop one of the lam and read the remaining one 'lam' with shadda. The letter 'r' is similar, e.g., we read the 'r' with shadda. For example, 'gafuurun raHiym' becomes 'gafururraHiym' or 'min rasuulin' becomes 'mirrasuulin' see ayat 30 below, or 'lain lam' becomes 'laillam', see ayat 18 below. 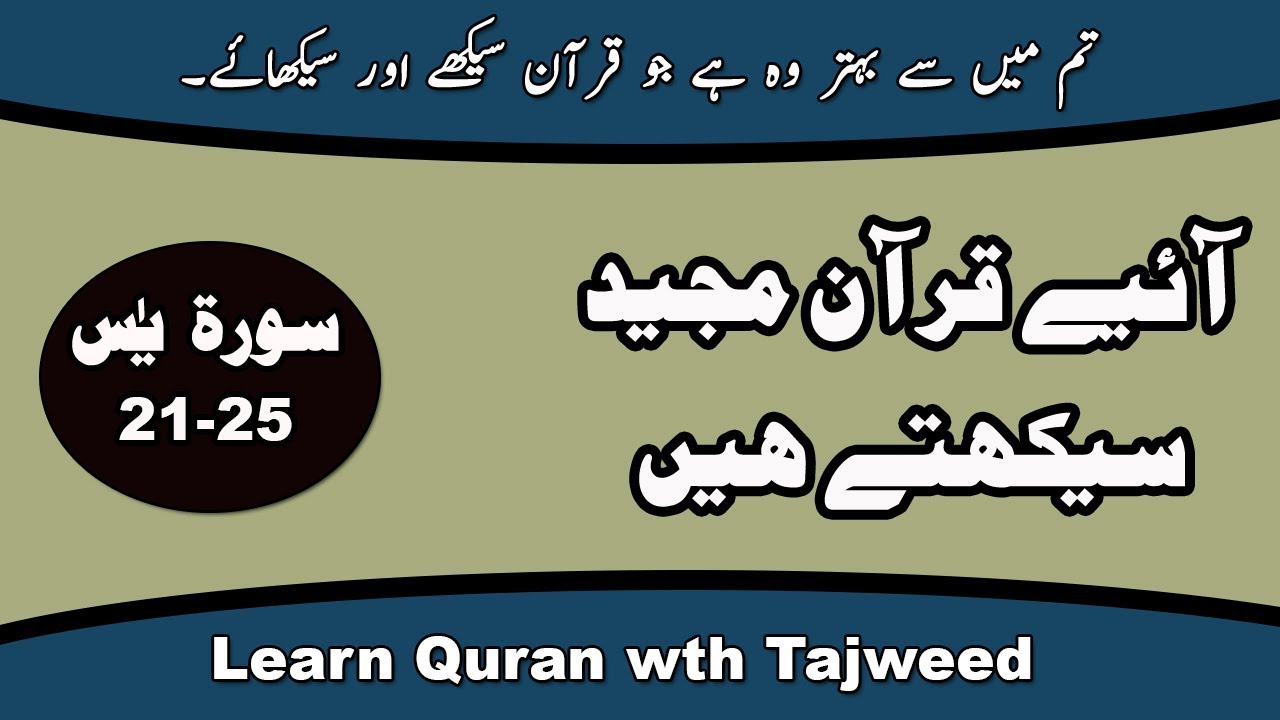 CHARACTERS THAT CONTROL THE READING

While reading the Qur'aan, the reader may get tired or his breath may run out at a certain point and must stop to take a breath. The point of his stopping sometimes may cause a very ill meaning. For this reason, scholars assigned various letters to control the reading. Please, learn the meaning of these letters and apply it while you read the Ya-seen or any other surah.

If you see any error or any other comments please send me mail at:
(PrayerWare)

What is a Noon Sakinah?

Basically the Noon Sakinah is a Noon ن devoid of any vowels; namely the Kasra كسرة, fatha فتحة, and dammah ضمة. In the Quran, the noon Sakinah can be depicted with a Sukoon سكون above it or without anything above it at all like this ن. It is important to note that both have the same pronunciation and are called Noon Sakinah. Here's an example of a Noon Sakinah in the Quran:

The tanween is an extra Noon Sakinah used with the Kasra كسرة, fatha فتحة, and dammah ضمة:

The noon of the Tanween is pronounced but not written:

Izhar (إظهار): In which a Noon ن is read clearly

When you find the following signs in Quran with tajweed, you should know that you have to pronounce the tanween clearly:

Idgham (إدغام): the Noon changes into a different letter

As we previously discussed in our previous article in the series “Learn Quran with tajweed rules: Ghunnah and Idgham” , there are two types of Idgham; One with ghunnah and one without ghunnah. In this article we will expound more on examples of Idgham without ghunnah, also known as Complete Idgham (إدغام كامل), in which the letter noon changes into the letter following it when it is either a Laam ل or Raa ر.

Iqlab (إقلاب): in which a Noon Is merged into the next letter:

Iqlab is when the noon sakinahor tanween is changed into a meem م when it is followed by a baa ب.

The equation of Iqlab (read from right to left) is:

An example of Iqlab with Noon Sakinah:

Ikhfaa (إخفاء): the Noon is hidden and is not clear

The fourth and final rule of Noon Sakinah and Tanween is the Ikhfaa, characterized somewhere between Izhar and Idgham with Ghunnah. Ikhfaa in Arabic means “to hide”. This is exactly what happens to the Noon Sakinah or Tanween in this case. The sound of the noon fades into the sound of the letter following it accompanied with a ghunnah sound. The letters causing Ikhfaa are all the remaining Arabic letters after excluding the Arabic letters causing Izhar, Idgham and Iqlab.

There are three levels of Ikhfaa concerning each group of the remaining Arabic letters depending on the proximity of the articulation point of a letter and the letter noon. The closer a letter’s articulation point to the noon, the stronger the ghunnah sound emitted and the closer the Ikhfaa is to Idgham and vice versa. These levels are:

Their articulation point is close to that of Noon. Strong Ghunnah. Ikhfaa is more like Idgham.

Their articulation points are not too close to that of Noon and are not far fromn it. Ghunnah is in between.

Their articulation point is far from that of Noon. Very week Ghunnah. Ikhfaa is more like Izhar.

We hope this article helped you in your quest to learn Quran with tajweed rules. We at Nour Academy strive to facilitate your path to learning Arabic and Quran with tajweed rules, which is why we specifically developed interesting curricula for those who wish to learn Arabic online and take Theoretical tajweed classes online. If you fit the criteria, be sure to check our broad spectrum of online classes and await our weekly articles for more Arabic and tajweed lessons.