I first read about Milkha Singh when the movie’s teaser came around 7-8 months back showing Farhan Akhtar portraying Milkha Singh in the biopic being made. Then I watched some of Milkha Singh’s Interviews on YouTube. Milkha Singh was talking about how he created a record in Olympics which no Indian has been able to cross. And he was complaining that there’s no seriousness among new athletes that can bless the country with records, medals and respect. It made some effect. Some months ago, when I read in a newspaper that Milkha Singh is writing an autobiography, I was all set to purchase it but the book is still in Pre-order section. I finally watched it yesterday. “Bhaag Milkha Bhaag” and there’s no words to define the greatness of the movie. I am just mind blown and dissolved in the excellence with which the movie is made.
Before this, I have never seen people clapping in the movie the way they clapped yesterday. I never saw half of the theater standing up during a race in the pre-climax. People were actually shouting,”Bhaag Milkha Bhaag” out of respect when a challenge was being given to him in Asian Games to defeat Pakistan’s Abdul Hafiz. What an environment it was. While watching the movie, I got a spirit and will to live- live for success, respect and immortality. The best part about the movie is that not for the once do you feel that it’s Farhan Akhtar. The kind of make-up, the kind of attitude that he carries, the face-cutting, the aura- Everything makes us feel that its real Milkha Singh running in front of us on the big screen and hence, there’s always respect for the actor whenever he’s the part of the screen space.
I am thankful that Sonam Kapoor wasn’t given a second more in the movie because for whatever 15-20 minutes she was, she showed that she is still to improve a lot. I don’t even know if calling her the actress of the movie would be justice because Divya Dutta took everyone’s heart away. Every time she entered the screen to act, she made the audience cry. What a powerful actress she is! It was a treat to watch her perform. Master Jabtej Singh, who has played young Milkha is as terrific as Farhan Akhtar. Pawan Malhotra touched heart as personal coach of Milkha Singh in Army while Yograj Singh has done a marvelous job in being his coach at the International level. Prakash Raj, thanks for acting differently in this movie otherwise I thought you just know how to play the same-kind-of-a-villain.
The very first scene of the movie is good in itself where Farhan Akhtar enters and stands in middle of the stadium and the camera circles around him. The scene when he is being thrashed and physically abused for trying the blazer of one of the champions is terrifying. The moment the young Milkha gets engaged with the goons, there’s a beautiful background score that we get to witness. The moment after partition when the young Milkha searches for his family and then meets his elder sister, Isri, is very emotional and heart-wrenching scene. Another scene when he goes to his home after the attacks during Partition and falls in the blood and then on the dead bodies of his family and neighbors is another scene that troubled an Indian within me. It tells the pain that Sikhs and all the victims went through because of partition. The very first race that’s shown during the development of Milkha where he falls just before the Finish Line due to a stone made me feel so pity about him. When Milkha Singh returns back his sister her gold rings is the scene that will remain with me for a long time..
As soon as Milkha’s 2nd inning begins where he starts winning matches after losing 1956′s Olympics is from where the real movie starts for me. The number of goosebumps and tears that I have gone through is countless. Any time, you ask me, and I am ready to watch this movie’s 2nd half because it is then that we realize how hard-working, determinant and professional Milkha Singh was. The body and physique that Farhan Akhtar has built is the pure example of hard work. The way he runs seems as if why doesn’t he participate in next Olympics. There’s one more scene when Farhan Akhtar slaps himself in front of mirror after losing a race…
However , I was skeptical about 2 observations too… Farhan Akhtar riding Desert Storm [A bike launced in recent years]to his village..and A Sikh with no chest hair
In the end, I would like to thank Mr. Rakeysh Om Prakash Mehra for making this movie with true loyalty and respect for the legend. The movie is being made in the same way as Rang De Basanti was made and hence, it justifies the 3 hours of time for which the movie runs on the screen. Not for a second did I feel that I am getting bored or why isn’t movie ending. I just want to watch this again and again. Friends, don’t miss this piece of excellence. You are not going to get it for a long time in Bollywood now. 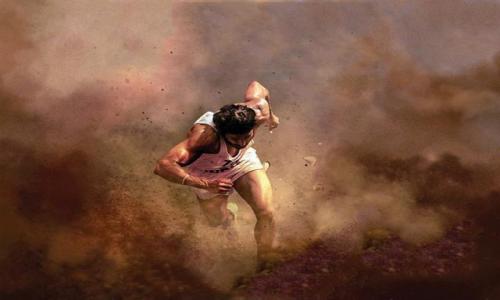 Swara Bhasker who will soon be seen the Netflix show Bhaag Beanie Bhaag spoke to mid-day about the stereotypes that female comedians face on a daily basis. Here's what Swara Bhasker has to say.