On that day, the boy remembered with fear that he was subject to their dominance and recalled with shame that the walls around him were a cage…

Sounds interesting right? Of course it does! Then you see….
Jean drawing Mikasa.
Ladies and Gentlemen, Attack on Titan, OVA 2!!!

You know that when they change the opening, and instead of Jean doing a slow motion flip as he usually did, he seems to take front and center. I knew. I knew that Hajime Isayama’s favorite character was going to rock the core. I did not expect this to take place after his character development, and I sort of cringed. I never appreciated his past selfish ways, the one that talked big just to be noticed by Mikasa. But this OVA, hands down, has to be the funniest OVA I have ever seen. I mean, Jean’s babyish nature was perfect for this setting, as you can just sit and laugh at him all you want.
(Who let the horse into the editing room? Attack on Titan OP, Jean version.) 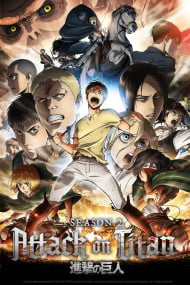 I remember ROFLing when I was listening to Armin’s intro, because it truly seems that he was subject to their dominance (his feelings for Mikasa. The loser was drawing her on his bed!!) and recalled with shame that the walls around him were a cage (his bedroom walls) and the cages are taken care of its superior owner (his mom). And such, Jean’s mom walks up the stairs in freaking slow motion, and I thought he’d be masturbating. He probably had been, and was mighty embarrassed that his mom had seen him such a compromising *cough cough: double entendre* situation. And oh man, I was so ready for this! I am going to highlight some of the main points of the show as a form of commentary.
Jean’s treatment of his mom was definitely unacceptable. It was a little harsh and unsound, but like, you have got to understand him a little. She waltzes in there carrying her basket of fruits and starts talking about how everyone should be nice to him, how he is a problem child. It is truly embarrassing and I feel for this guy. But the mom should also know not to do that, but I guess she is a little simple-minded. His mom might have also been a little lonely and wanted to pay him a visit. He loves her after all. This is when the OVA started to get a more serious tone.
Jean reflected on his actions and deemed them too harsh. He remembers all the time that she had been kind to him, loving him, devoting her very minutes to him and taking care of all his needs. He remembers her saying that he was a kind kid when he took care of her when she was sick. You just get a sense of how much she cares for him and Jean uses her strength to help him go on and cook as he is alone. Those scenes were so powerful, it shows how much of a heart he possesses. He is a jerk with a heart of gold. He loves his mom, and he made a silent vow to her. It was beautiful, exhilarating.
Jean’s omelet looked seriously disgusting compared to Sasha’s delicious chicken. But Jean just HAD to win considering that it was his OVA. It was stupid because I thought that Sasha would win. I mean Pixis flew skyward, started slashing titans left and right at lightning speeds, did not forget his alcohol, transformed into a titan, and had the likes of JEAN, ARMIN, and MIKASA to transform into titans as well to “protect the city” from this rampaging monster by imitating Eren…. Seriously, this was the scene that got me rolling on the floor (or bed) trying so hard to contain my laughter, I cried. I have never seen anything so funny, especially these guys saying “Leave it up to us!” and transforming into the ugliest-ass titans I’ve ever seen!
This all came from Sasha’s boar whatever, and knowing how much I love meat, I can understand Pixis.
Then Jean handed that disgusting, barf-worthy thing. Pixis did NOTHING and he won. No big celebration. If I understood correctly, Jean won because 1, it was Pixis’ supper time, 2, because meat is meat, and 3, Sasha should have stuck to potatoes and carrots. Carrots?? Sasha’s tormented muttering made no sense. I have never seen her eat carrot before.

Final thoughts/Rating: Nonetheless, this OVA was incredibly funny, amazing and beautifully animated. You get introduced to familiar characters and you either love them more or hate them more. The scores will get you into the moment. You will fall over yourself laughing, I promise you. Remember, this is Attack on Titan, so this amount of humor is rare. It should be taken advantage of.
Overall, 9.8/10!

Currently the Attack on Titan anime series has released two Original Video Animations (OVA) that provide a side-story to the main plot of the anime series.

Ilse's Notebook: Notes from a Scout Regiment Member was the first OVA of the Attack on Titan anime series. It corresponds as Episode 3.5 of the Attack on Titan anime series and was produced by Wit Studio and Production I.G. Although it was originally scheduled to be released on August 9, 2012, bundled with the Volume 11 limited edition, it was postponed and was included with a limited edition of Volume 12 and released on December 9, 2013 instead.

Ilse’s Notebook was included in a subtitled DVD with the English limited edition release of the 17th manga Volume that was released on December 1, 2015. A second OVA titled “The Sudden Visitor: The Torturous Curse of Youth” was also published on April 9, 2014, which was bundled with the 13th Volume of the series. This second OVA focused mostly on the members of the 104th Training Corps.

In 850, the Survey Corps went on a mission. During this mission, Hange spots a Titan and decides to pursue him to capture it. When Hange was able to get the Titan’s attention, it suddenly retreats to the forest. Hange follows it where she finds it banging its head against a certain tree. The Titan becomes aggressive when Hange tries to get closer to it, but Levi and the others arrive on time to kill it. While investigating that place, they discover the decapitated body of Ilse Langnar, a soldier from the 34th Survey Corps division, inside the tree. Lying on the ground, they also find her notebook, which contains details of how she escaped on foot after her squad was killed. At some point, she was cornered by a Titan, but instead of killing her straight away, the Titan started to speak to her in human language, and it called her “Ymir”.

As she prepares to fight the Titan unarmed she continued to write words in her notebook so as to not to lose hope. In her notebook it states that after escaping from slaughter that her squad wasn’t able to she arrives in a clearing and her path unfortunately crosses that of the same Titan. A fight begins between her and the Titan, she quickly finds herself stuck, back to the tree with her notebook still in hand. Her tears flow but she still continues to write in her notebook. She describes her meeting with the Titan as well as all of her physical details and the fact that the Titan did not devour her right away. She also writes that when she believed her time had come. Filled with frustration, she wishes to see her parents before dying.

Although in the OVA this event is set in the year 850, according to the Attack on Titan Guidebook, these events are placed in the year 849.

The Sudden Visitor: The Torturous Curse of Youth

A Sudden Visitor: The Torturous Curse of Adolescence is the second OVA of the Attack on Titan anime series, which corresponds to episode 3.25 of the Attack on Titan anime. It was also produced by Wit Studio and Production I.G. This episode was released in Japan with the special edition of Volume 13 of the manga. After, an English version was published with the special edition of the English translation of Volume 20.

In 849, Jean Kirstein comes back home after two years of training. After an argument with Sasha Blouse during a training exercise, a drunk Commander Pyxis suggests they settle things in a cooking contest. During the preparation of this contest, an unexpected visitor arrives to meet Jean.

To everyone’s surprise Jean won, Sasha tells Dot Pixis that she cannot accept the result and asks for an explanation. Pyxis asks what meat is; Sasha only replies that meat is meat, and Pixis explains that meat cannot be anything more than that, and that is the reason why she lost. Sasha cries for her defeat, but Jean offers her a hand to stand up, running out of resentment. To conclude, Jean decides to go home the next day.

Unlike what is usual in Attack on Titan, in this OVA Jean is the main character, with actual main characters Eren Jaeger and Mikasa Ackermann are placed in a secondary role, and Armin Arlelt as a supporting character.

Also, in the scene where Mikasa turns to look at Eren, it is Jean who looks at Mikasa instead, which would be a reference of him having feelings towards Mikasa.

In addition to the OVA itself, this OVA comes with five of the eight fake volume previews that manga creator Hajime Isayama has drawn. The first one corresponds to Volume 4, where Sasha is cooking. In Volume 7, Jean’s mother is entering his room without knocking. Later, in Volume 8, Armin is hurting his legs on the stairs. In Volume 9, Sasha is slapping and elbowing Reiner. And finally, in Volume 12, some fake Titan forms for Mikasa, Jean, Armin, Historia and Connie appear.

Other additional information that can be seen in this OVA includes Sasha stating that she doesn't like her popular nickname “Potato Girl”. Also, only Mikasa seems to regularly accompany Eren, while Armin seems to be more sociable and interact more with other characters, like Annie and Jean. In addition, another fact that can be observed in this OVA is that, unlike in regular Attack on Titan stories, no human or Titan is killed in this episode.